Fuel Gems are required to power the automated mining process and come in various colors.

Fuel Gems may be placed in the players small backpack pocket for easier transportation.

Fuel Gems can be re-sold to the store, with the price depending on the remaining energy in the gem.

The resell price is calculated by the purchasing price of the gem multiplied by the percent of energy remaining, rounded down.

The lowest that a gem can sell for is 1 Rusty Coin.

Fuel Gems must be placed in the designated slots on the Fuel Gem Extractor panel, found in the Washplant Area.

Once a Fuel Gem is empty, the player can replace it by grabbing it from the panel and replacing it with a new gem. 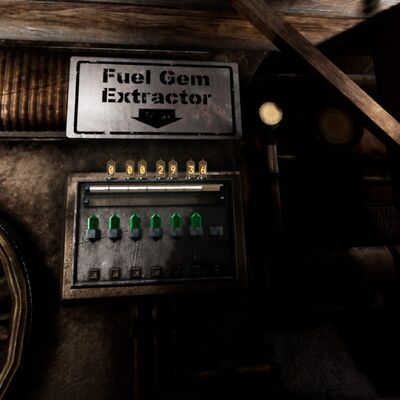 Gem Extractor displaying the gems currently in use and the total time remaining.

The base duration is calculated at Fuel Gem Extractor level 5.